I’ve been on the lookout for a client that would somehow unify my streams from both Twitter & Identi.ca. There’s a few clients that will support one-or-the-other (sometimes via hacking the source) but I’ve found none that scratch my itch of have both services presented in the same window. My taskbar is precious real-estate.

These instructions reflect my setup on an Ubuntu vhost which I ssh into via PuTTY.

Step 1, download TTYtter, make it executable and put it somewhere on your $PATH.

Step 2, create a file at ~/.ttytterrc1 with the following contents, including your identi.ca login:

Step 3, create another file at ~/.ttytterc2 with just your twitter login:

Step 6, start your Identi.ca session in the top window with the command ttytter.pl -rc=1

Step 7, switch to the bottom pane with the screen command Ctrl+a TAB

Step 8, create a new window in the bottom pane with the screen command Ctrl+a c

Step 9, start the Twitter session in the bottom pane with the command ttytter.pl -rc=2 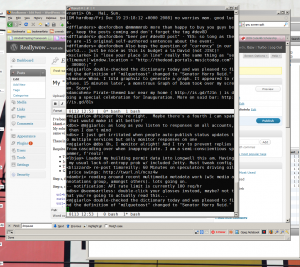 Only set this up 2 hours ago but already I can tell this is going to work for me long term. Beats having to do hard resets due to some combination of Twhirl and/or my video drivers. One improvement I’d like to investigate is some kind of color highlighting of the

So I quickly realized that the above setup has a major malfunction, namely that it doesn’t allow preserving of the split window so it’s not possible to detach and reattach to the ttytter screen session. So there’s an extra trick necessary to do this:

The -e^Ee option binds the escape key for that session to Ctrl+e instead of the default Ctrl+a. This is a common trick for embedding screen sessions within sessions. With this extra step I can now detach from the outer session using Ctrl+e d and reattach with the inner split-screen session presevered using screen -r outer.

Also, I learned that to colorize the output you can use the -ansi option to ttytter.